Scientists at home and abroad criticise the decision to cancel widely admired infection-surveillance projects including React-1 and Zoe.If anything about the UK’s response to Covid-19 was world-beating, it was our surveillance system. From the World Health Organization to the US Centers for Disease Control and Prevention (CDC), public health teams around the world have praised the UK’s infection-tracking capability, and used our data to plan their own pandemic measures.

Despite this health ministers have cancelled future funding for the React-1 study and other research projects. The decision has been met with dismay among leading scientists and researchers worldwide, who have questioned the UK’s ability to respond to future Covid threats.

Last week, researchers from Imperial College London revealed the latest turn in the pandemic with the finding that infections had begun to rise in people aged 55 and over. Imperial’s scientists work with Ipsos Mori to analyse PCR test results from more than 100,000 people a month.

The results from React-1, alongside the weekly Covid infection survey from the Office for National Statistics’ (ONS) have given precise snapshots of how many people are infected and which areas are worst affected. The surveys are much more reliable than self-selecting community testing data, which misses many asymptomatic cases.

React, together with the ONS Covid infection survey, provided the UK with exceptionally good awareness of the pandemic

Yet Professor Paul Elliott, director of the React (Real-time Assessment of Community Transmission) study at Imperial, said last week its future depended on funding from the Department of Health and Social Care – and that funding would cease this month.

“We have one more round,” he said, at the announcement of the 18th set of findings last week. “So we’re going to be in the field from now till the end of March, but we’re not funded beyond that.”

Other research, including the Zoe Covid app, which tracks people’s symptoms and has cost £5m over the past two years, is also being defunded. Professor Tim Spector, who leads the research, said they had received “only a few weeks’ notice” of the “disappointing news”, after being assured by the UK Health Security Agency (UKHSA) that it was almost certain that funding would continue. “We strongly believe that decision is a really bad mistake,” he said, adding that it cost only 1% of the funding needed for the ONS study. 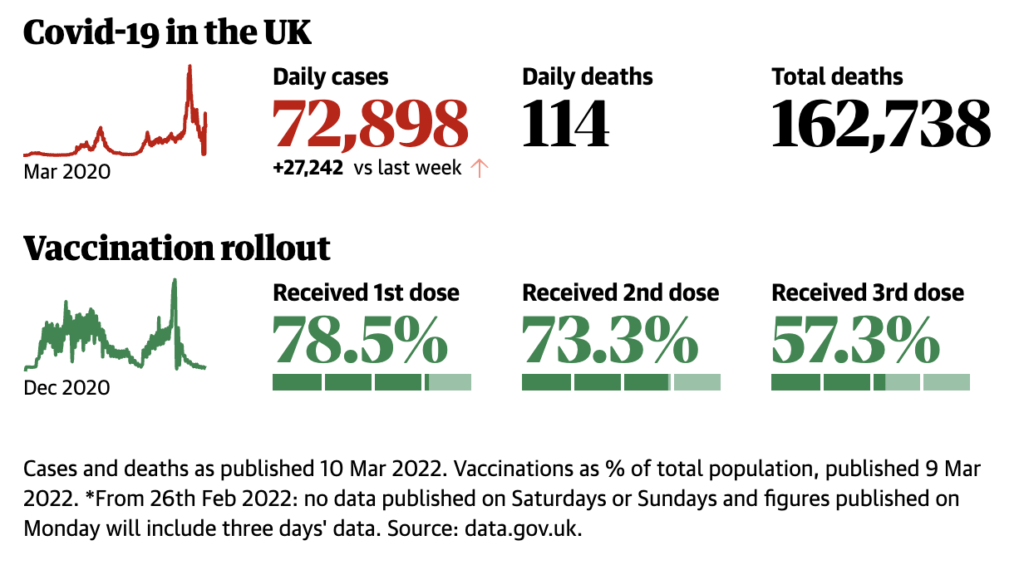 The UKHSA’s own Siren study, which tracks infections in health workers and found that vaccine protection begins after two weeks, is ending recruitment on 31 March, although the body’s chief medical adviser, Susan Hopkins, said in a blogpost it would “continue to answer the most important questions about Covid-19 infection, reinfection and antibodies”.

University College London’s £4m Vivaldi study, tracking infections in care homes since May 2020, runs only until April 2022, according to UCL’s website.

And the CoMix social contacts survey, run by the London School of Hygiene and Tropical Medicine, which asks people how many direct contacts they have had with other people, stopped collecting data on 2 March and has published its final routine report.

The ONS weekly survey is to continue, after Sajid Javid, the health secretary, reportedly lobbied to keep it, in the face of Treasury cuts.

Professor Marc Lipsitch, director of science for the CDC’s Center for Forecasting and Outbreak Analytics, visited the UK last month to speak to researchers at the ONS and Imperial with a view to setting up a similar system in the US.

“I think the UK can be justifiably proud of the system that it had, and it would be wise to try to build on that for future preparedness,” he said. “From a scientific perspective, React, together with the ONS Covid infection survey, provided the UK with a level of awareness of the pandemic that was really exceptionally good.“A proper random sample of the population is a very much superior way to understand the number of people who have the virus and the number of people who have had the virus, which are the two most critical things in understanding the progress.

“[It] is a gold standard for how to understand the pandemic. And certainly one way to be prepared for future waves or other viruses is to keep some capacity going.”

The UKHSA itself praised the work of the React-1 team in a blogpost in December, describing its work as “crucial in helping the government’s response to the pandemic”. It highlighted as one of React’s “key achievements” the discovery that a third of cases are asymptomatic.

Professor Sylvia Richardson, president of the Royal Statistical Society, said: “These two studies, the ONS survey and React, are unique in the world in my opinion. We should be proud of them. React picked up very early, in December 2020, that infections in the London area were not decreasing as expected. Now they’re picking up that cases are rising in the older population. They are picking up trends and we can trust those trends because of the robust way the study is done.

“We know immunity is going to wane and health authorities have to decide how to deal with that, with recommendations for boosters, for example. So they need reliable information about what is going on to target their strategy.

“React has given very good information about the effectiveness of vaccines and can monitor the waning of immunity. The pandemic is not yet in a stable equilibrium. Many factors are still changing and we need to keep monitoring basic epidemiological quantities such as prevalence in a reliable way.

“I would like to see a strategic plan for preparedness in terms of what type of studies and resources they are going to keep. So far, myself and other experts at the Royal Statistical Society haven’t been consulted, and there seems to be a lack of strategy – we don’t know how they are going to monitor new variants, for example.”