Only 46% of adults in England in this group have had a fourth shot, with take-up varying by ethnicity

Less than half of the severely immunosuppressed adults in England have had their Covid booster, and levels of uptake differ dramatically across ethnicities, data shows.

Everyone over the age of 12 in the UK can have two doses of a Covid jab, and those aged 16 and over and some children aged 12 to 15 can have a third jab, known as a booster. A second booster programme began this month in England, Scotland and Wales for people aged 75 and over, older people living in care homes, and anyone aged 12 and over who has a weakened immune system. Northern Ireland’s campaign is to get under way shortly.

Now a leading charity has raised concerns after figures released on Friday by NHS England revealed that by 24 March only 255,422 out of the 561,356 individuals identified as severely immunosuppressed in England had received their fourth dose – which is their first booster – leaving 305,934 (54%) without maximum protection. 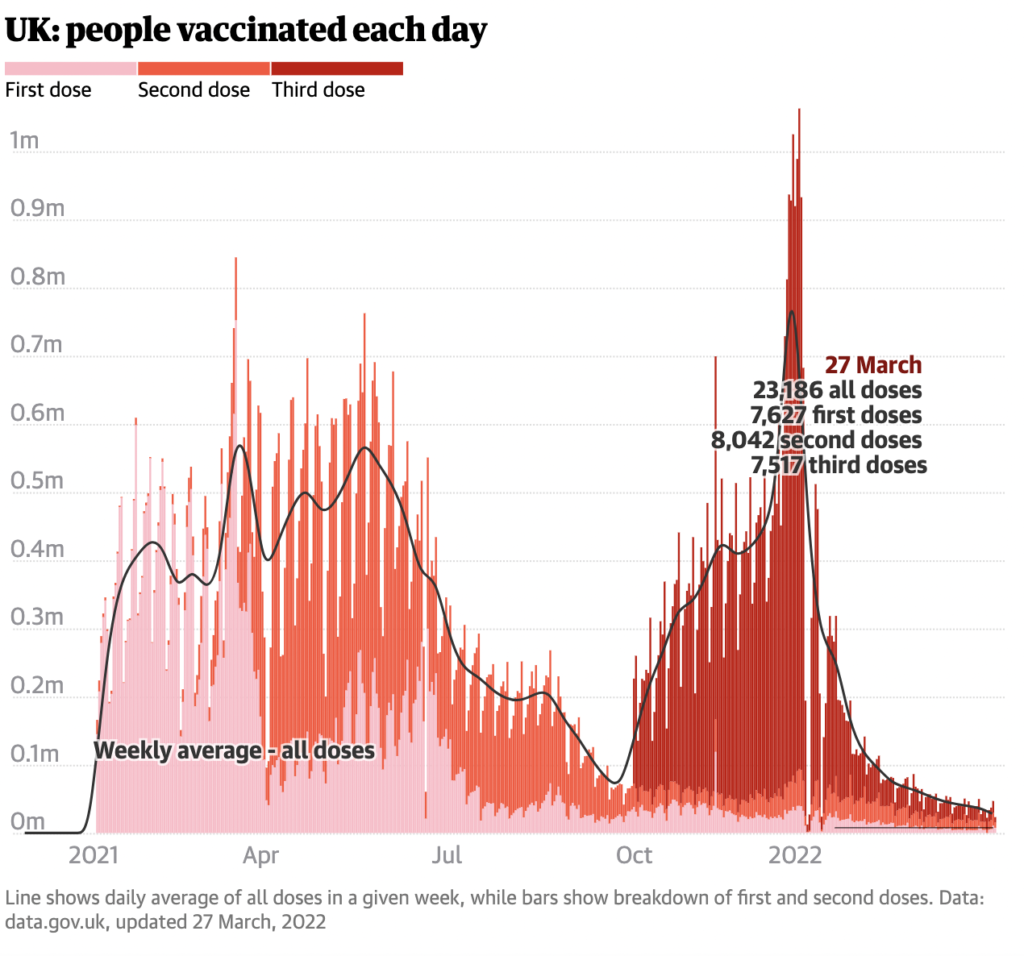 While Blood Cancer UK said the situation had improved since 6 February – at which point data released through a freedom of information request suggested that only 16% of severely immunosuppressed people had received a fourth dose – the situation remained of concern.

Gemma Peters, the chief executive of Blood Cancer UK, said she was “very worried” by the numbers. The charity noted that data from early February also suggested uptake of a fourth dose varied by ethnicity. While 17% of severely immunosuppressed people from a white British background had had that jab by this point, the figure was just 2% for those of a Bangladeshi background, and 3% for people of a black African background.

The data suggested the overall uptake of fourth doses was slightly higher in Scotland: by 25 March almost 55% of people who are severely immunosuppressed had received a fourth jab – a total of 36,585 people.

Blood Cancer UK said confusion and delays around third doses had had a knock-on effect on the date at which some people became eligible for their fourth jabs, adding that other possible reasons for some not yet receiving their booster could include people not being aware they are eligible, or not being contacted by the NHS.

An NHS spokesperson said: “We welcome Blood Cancer UK’s clarification, with the latest data showing that around nine in 10 severely immunosuppressed people have had a third dose and nearly half have had a booster, which means that hundreds of thousands have had a top-up, with more coming forward every day.

“Decisions on when to get the vaccine for those with a weakened immune system should be made between patient and a clinician and we continue to ask charities to use their profile to work alongside the NHS ensuring those due for their vaccine come forward.”

Infection levels continue to rise in England, Scotland and Wales, with the data suggesting roughly one in 16 people in England had Covid in the most recent week, and one in 11 in Scotland, a record high.

Figures from the Office for National Statistics reveal levels in England are highest in those aged two to school year six, with an estimated 8.3% of this group testing positive in the week ending 19 March.

The education secretary, Nadhim Zahawi, told the BBC’s Sunday Morning programme that about 200,000 children were off school in England because of coronavirus, and more details on the provision of free rapid tests would be released this week.

The government has previously said that from 1 April free lateral flow and PCR tests will cease for the majority of people in England, with other countries in the UK also set to reduce free testing in the coming weeks and months.

Paul Whiteman, the general secretary of school leaders’ union NAHT, said: “Removing free access to lateral flow tests at this point feels irresponsible. It will make tracking and controlling Covid almost impossible. There is a lot of anxiety from school leaders about what could happen once tests are unavailable.”