Come the end of March, the lights will dim on the UK’s Covid epidemic. Despite infection levels rising, cases will plummet, as free lateral flow and PCR tests are stopped for the majority of people in England, with other countries in the UK also set to reduce free testing in the coming weeks and months.

But while the government has argued it is time to manage Covid as we do other infectious diseases such as flu, scientists have warned ending community testing could put vulnerable people at risk and undermine efforts to understand the virus.

From 1 April, symptomatic testing will be free only for certain groups, such as hospital patients and social care staff. However, the Department of Health and Social Care has yet to give details on which other groups will be eligible.

After a winter of “flow before you go”, the change in policy seems dramatic.

Tackling Covid has undoubtedly been expensive: free testing, contact tracing and research studies do not come cheap. And, as the government points out, there is a high level of immunity across the country and the Omicron variant is less severe – the threat to most people is very different now to what it was at the start of the pandemic.

However, the end of free community testing means most individuals will be in the dark as to whether they have the virus, unless they are able to pay for a test, meaning they may go into public places while infected, passing the virus on to those they would otherwise have tried to protect. The situation is likely to be worse in more deprived communities.

While the success of vaccines and other approaches in tackling the severity of Covid, as well as less severe variants, may suggest that is not the problem it once was, rising infections have once again put significant pressure on the NHS. Experts warn even hospitalisations with Covid, rather than because of it, can cause logistical difficulties, exacerbate existing health problems and put vulnerable people at risk.

A lack of knowledge about previous infection could also prove problematic for access to appropriate care for long Covid and could even affect disability claims after occupational exposure. 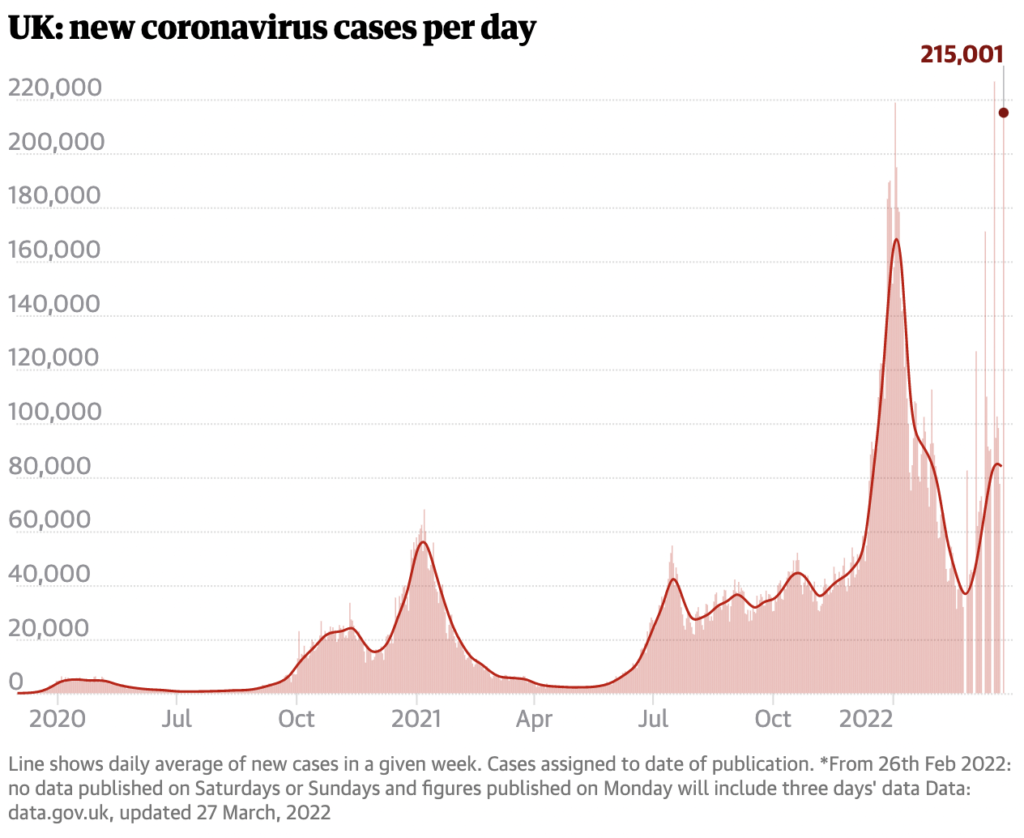 Prof Azra Ghani, an epidemiologist at Imperial College London, added it was unclear how, without current testing, interventions will be rapidly delivered to the most at-risk patients, while she noted the move also raised the question of whether GP surgeries – which are by their nature frequented by sick and vulnerable people – could end up being areas of high risk for Covid infection.

Attempts to track the rise and fall of Covid and its variants will also be affected: while case numbers are an undercount of infections, they can give a rapid indication of a step-change in how the virus is spreading.

Ministers claim surges in the virus will be detected by the Office for National Statistics infection survey, however, the government has cut funding to several Covid surveillance programmes including the React study, which looks at infection levels in the general population on a larger scale. Coupled with the loss of community testing, Ghani said there would inevitably be a delay in detecting variants – and that could have global ramifications.

Even our understanding of the severity of Covid and how well vaccines work could be affected without community testing data to couple with vaccine status and hospital data.

Prof Christina Pagel, the director of UCL’s clinical operational research unit, said one of her concerns is that the move sent the message that the pandemic was over.

For some, such as Prof Mark Woolhouse, an epidemiologist at the University of Edinburgh, reducing community testing is not unreasonable, given it is not how most diseases are monitored and most people could buy a test if needed.

However, he said the NHS would need additional funding to cope with the resulting burden of infections and hospitalisations, a plan to ensure vulnerable people were protected – for example through regular testing of their contacts and immediate provision of both tests and antivirals should they themselves develop symptoms – and provision for mass testing to return if needed, ideally within the space of a week.

“It would be a major surprise to me and many other people if we didn’t have a significant wave in this calendar year,” said Woolhouse.

While opinions differ on how big a blow the end of free community testing is, experts agree plans must be put in place to deal with the ramifications, and future challenges.

“Living with Covid should not be equated with ignoring Covid,” said Woolhouse. “It remains a significant public health threat.”