Ministers should consider extending the plan to give a fourth dose of Covid vaccines to older people because of evidence of waning immunity, scientists say.

The number of people being admitted to hospital with Covid began rising last week, and on 9 March 1,521 were admitted in England – the highest number since the end of January.

Figures from the Office for National Statistics show that one in 25 people, or 3.8% of England’s population, was infected on 5 March, and research by the React-1 study indicated that cases are rising in those aged 55 and over.

Scientists say the rise is because the BA.2 version of Omicron is more transmissible, more people are mixing socially and the effectiveness of booster vaccines is starting to wane. Sajid Javid, England’s health secretary, announced last month that immunocompromised people, care home residents and anyone aged at least 75 would be offered a fourth dose of a vaccine in April, after advice from the Joint Committee on Vaccination and Immunisation.

The new data shows that the government should reconsider, said Penny Ward, visiting professor in pharmaceutical medicine at King’s College London. “The slow start of [the fourth dose] campaign now means the most vulnerable group are already at least six months away from their third shot at this point,” she said.

“The government needs to consider carefully whether they should acquire further doses of antivirals to treat a broader proportion of the vulnerable elderly group and accelerate an additional booster campaign to try to reverse this.”

Stephen Griffin, associate professor in the School of Medicine at Leeds University, said he was concerned by the rising numbers in hospital. “We are not in a stable situation,” he said. “As the virus changes and our immunity drops, we are going to start encountering these problems. People are mixing more and not taking precautions. “Vaccines are at the core of our strategy but they shouldn’t be the only thing in it. If you’re faced with no other choice, and the only control you have is vaccination, then [boosting] is what you have to do. But if we start giving fourth, fifth, sixth vaccinations while the rest of the world isn’t getting any, then that is a problem in itself.”

The latest data from the UK Health Security Agency shows that for people of all age groups who received a Pfizer booster, the vaccine effectiveness against hospital admission drops from around 90% to 75% within three months.

A study of people aged 75 and over found that vaccine effectiveness against hospitalisation fell to 88% within the first three months.

It is not clear how effective a fourth dose would be. Israel began offering fourth doses after Omicron was identified, but a study of 274 Israeli healthcare workers found that the extra shot restored levels of some antibodies but did not provide any extra immunity.

Professor Sir Andrew Pollard, director of the vaccine group at Oxford University, which developed the Oxford/AstraZeneca vaccine, said that because most of the population was vaccinated, those people would only find Covid infections to be inconvenient and unpleasant. “It was expected and inevitable there would be a rise in infections once restrictions were relaxed and social contact increased,” he added. 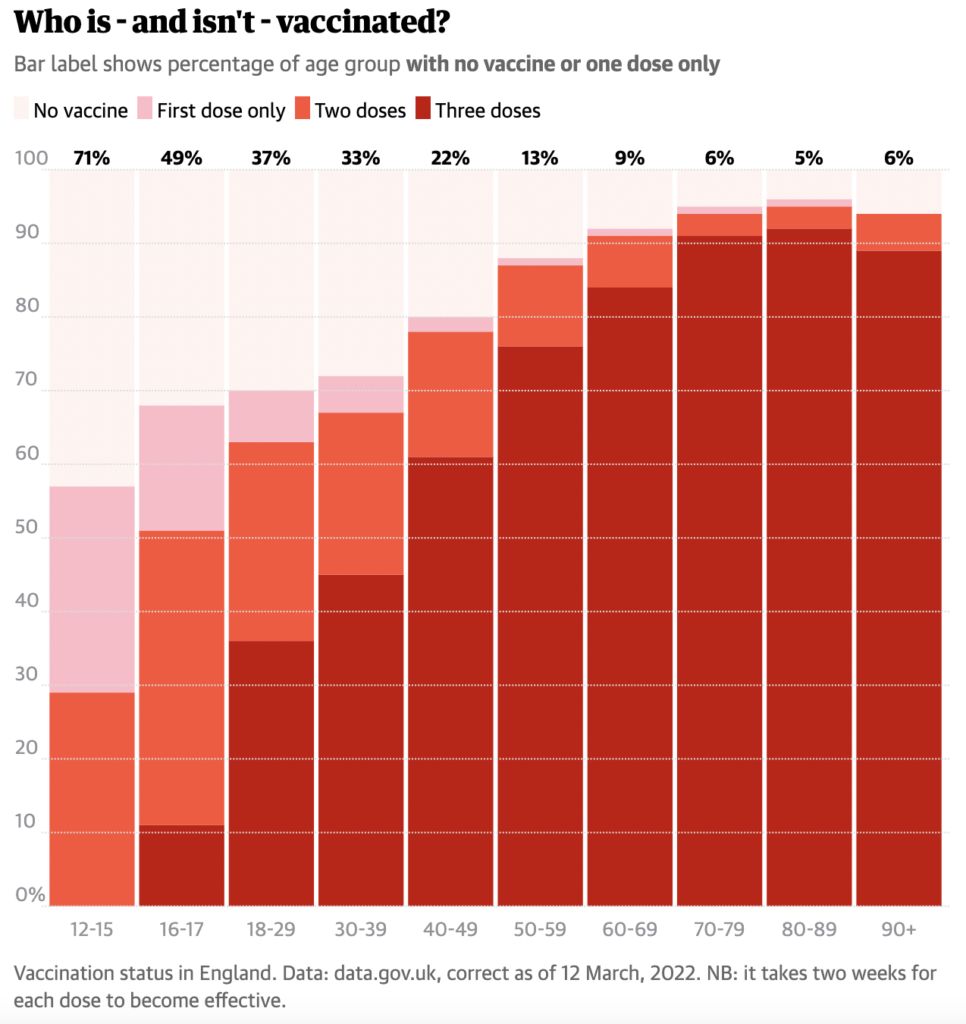 “The appearance of better-spreading variants will also contribute.”

But he expressed concern for vulnerable individuals who could not be vaccinated, and those with underlying health conditions: “For this group waning immunity is a factor because they need such high levels of immunity to prevent these destabilising infections,” he said.

Hospitalisation data does not show how many people in these groups are affected or those who are admitted for other reasons, Pollard said.

“There will be a lot more of these incidental infections in hospitalised patients when there is a lot in the community. So, we should be more attentive to the details behind the headlines on cases and hospitalisation as this will better direct the appropriate actions on treatment of those who have COVID-19 disease, vaccination of those for whom there may be a benefit – including a further dose where deemed necessary – and no action where it is appropriate.”

“While rates of severe disease and death due to Covid-19 remain low, there has been a recent rise in hospital admissions and we will continue to monitor this data closely.

“Vaccination remains our first and best line of defence against illness, and it’s vital that everyone has had their latest dose. We can all help reduce transmission by wearing a face covering in crowded or enclosed spaces, washing hands regularly and keeping rooms well ventilated.”